Cobot: How robot and humans work together

The supplement of the Financieel Dagblad of Friday July 7th, 2022 “Future of the Economy”, contains an interview with Jeroen Calis, founder of SICA packaging & robotics.

In case you did not see the FD supplement,  you can read the (English translation of the) interview in full below.

“At SICA packaging & robotics, they develop total solutions in which cobots and humans work together. The Ultimate Palletiser, for example, enables a robot arm to do its work even more flexibly. It takes away tedious, heavy work, such as stacking boxes, crates, trays or buckets on pallets. The machine has recently been fitted with a robotic arm that can lift up to 20 kg.

SICA packaging & robotics was founded in 2020 by Jeroen Calis, who has been active in the world of packaging technology for decades. “I saw that due to the lack of sufficient manpower in the market, there was a growing need for standard solutions for repetitive tasks.”

His company designed the Ultimate Palletiser. A frame equipped with a lift that allows the cobot arm to rise and fall, depending on how high a pallet needs to be stacked. This palletiser is equipped with not just any cobot arm, but with a Fanuc cobot arm. Cobot stands for Collaborative Robot. They are handier and safer than ordinary robots. Calis: “Our cobot applications are therefore compact, flexible and safe. There is no need for a fence around them and they meet ISO standards and are fully CE certified. “To take safety to an even higher level, we design our 3-D printed grippers with rounded corners ourselves.” 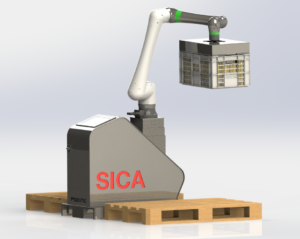 With SICA packaging & robotics’ cobot applications, such as the Ultimate Palletiser, companies can partly overcome personnel shortages while improving the ergonomics of their employees. The machines are easy to move and, above all, versatile. They can perform a variety of tasks. “You can pre-program some common tasks, but a new task can easily be taught in,” says Calis. “Think of it as an employee who is presented with his work in the morning meeting.”

The cobot can work 24/7 without a break. “For example, if you deploy an Ultimate Palletiser with cobot arm at a site with two- or three-shift operation, the investment has already paid for itself within a year.” There is a lot of demand for the Ultimate Palletiser, a Dutch-made product, says Calis. “Especially in the food and pharmaceutical industries, where we have traditionally been strong.” With the arrival of the cobot arm that can lift up to 20 kilograms, Calis foresees a sharp increase in demand.

Alongside the production line

Apart from the Ultimate Palletiser, the cobot arm can be used for many other pick-and-place operations. For example, work is currently being done on case packing. This involves a cobot arm standing next to the production line on a moveable platform, for example to fill trays.

In this way, Sica is not only working on safer working methods, but also on the problems on the labour market. Because it’s not easy to fill all the vacancies for this kind of heavy, repetitive and ergonomically disadvantageous work.”